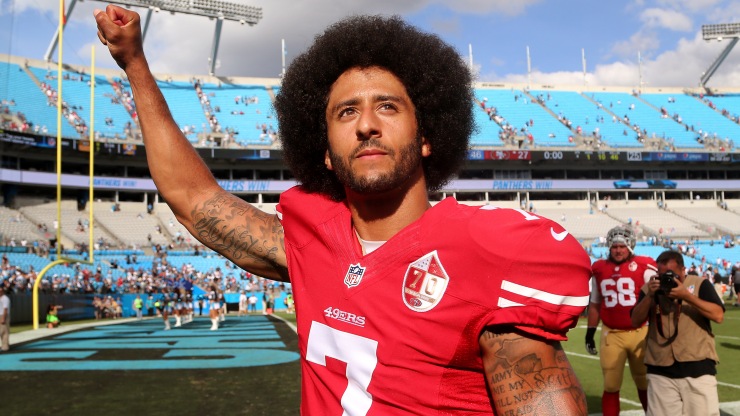 For years, permanently injured players have been left to figure out how they will financially support their families and how they will carry on with their lives after committing years to football. Currently, the NFL is settling numerous lawsuits from former players who claim that their disabilities resulted from injuries on the field. But that’s not the only controversy stirring in the NFL.

In Fall of 2016, San Francisco 49ers quarterback Colin Kaepernick knelt during the national anthem. At the time, many believed the media would quickly move on to another more trendy story. Afterall, he wasn’t chanting or picketing. He was simply kneeling. But as weeks passed, white anger slowly unveiled itself, and patriotism took the main stage. Critics saw Kaepernick’s quiet gesture as a radical protest. Yet, he still knelt game after game.

The NFL has a longstanding history of utilizing bodies for financial gain, in particular, black bodies. It is a marketplace for bodies. Bodies that can be negotiated and sold and traded in the name of increasing revenue. I hear sports fans say often that certain teams don’t win because the owners ‘don’t want to spend the money’. However, Kaepernick was recently released from his contract, something for which he seemed prepared.

In a recent interview, Buffalo Bills running back LeSean McCoy said he thinks that Kaepernick was released because he’s not a great player, not because he didn’t stand for the anthem. He added that from the perspective of a team owner, Kaepernick isn’t worth the distraction if he can’t play well. I’d argue that even when athletes play well, there is a general discomfort with them expressing resistance to racism. They usually are told to stick to the game, proving once again that a working, non-resistant black body is most favorable (and profitable) in this society.

Last year Kaepernick revealed that he had a metal rod placed in his left leg prior to his rookie year. Still, he attended practices and later led the 49ers to the Super Bowl in 2013. In 2015, he injured his throwing shoulder. He’s also suffered injuries to his thumb and knee. Although he’s had surgeries and rehabilitation, his playing abilities suffered.

By kneeling, Kaepernick demonstrated ownership of his body, a black body that has been endangered for a time that is too long to measure. That is a radical act of self-care. The concept of self-care, for a long time, was viewed as a luxury accessible to an elite few. And, self-care is publicly declaring that your life matters beyond what your performance on the football field.

According to the New York Times, NFL players are becoming permanently disabled after suffering head traumas. Those injuries have caused concussions, dementia and chronic traumatic encephalopathy. Now, some players’ wives have created at least one space, in the form of a private Facebook group, where they share their experiences and gain strength from each other as they become caregivers and advocates for men who once were larger than life. I believe that this generation of athletes will begin to demand more than money for play. They will demand the right to safety and self-care, and they will begin to plan for their legacies and quality of life off the field.

Athletes are human and imperfect. For many, they are heroes which must be a compliment, but it must also be a lot of pressure. This next generation of athletes will need to employ a high degree of self-care if they want to a productive career and higher quality life after retirement.

Athletes inspire us because of their consistency and their unmatched desire to win. I’ve never met an athlete who thought second place was good enough. They want to be the best. Their drive is a metaphor for how many of us want to live our best lives.

Join Us on Social Media